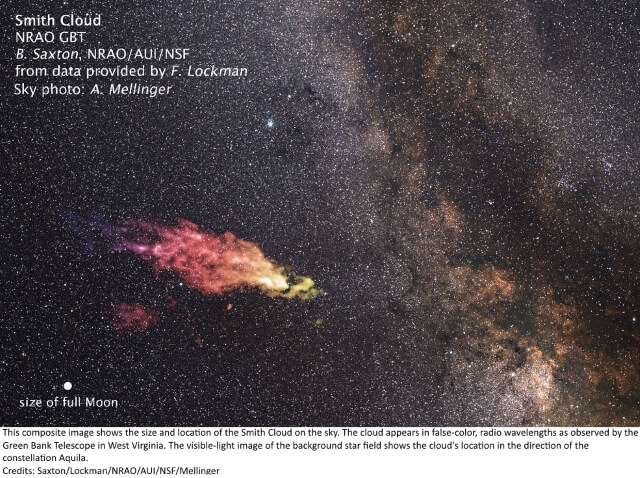 There is a massive gas cloud that is predicted to hit the Milky Way Galaxy. But before you lose sleep, and rest assured, there is no real danger to the galaxy when the cloud hits in approximately 30 million years. What has been dubbed the Smith’s Cloud since it was noticed in 1963, scientists still are not aware what the actual origins of the cloud are.

What they do know is that the cloud is high velocity and consists largely of hydrogen gas. Currently located in the constellation known as Aquila in the Galactic Galaxy. The cloud has recently started to boomerang in direction and that is when scientists realized that it was heading for the Milky Way.

Of course, with the way the galaxy works, 30 million years from now it could end up in a completely different location. There are still plenty of variables that it has to go through and while there is some accuracy in scientific predictions, the uncertainty of what could happen in the future that could impact an unforeseeable chain of events that ultimately leave the gas cloud somewhere else down the line.

Here’s what NASA has to say on all this …