A material that heals itself – think of the possibilities

Think of it, a self-healing material just like something you would see in a Terminator movie.  But that’s exactly what the combination of science and materials just accomplished.  And it has applications that are both Earthly and beyond.

It is a special liquid that is sandwiched between solid polymer panels.  When punctured, the liquid reacts very quickly with oxygen in the air (inside a spacecraft for example) and rapidly forms a solid plug.  The hole is repaired.

The video on page 2 shows the process as the result of a bullet penetrating the plates, but in space, this could just as easily be other high velocity particles that plague astronauts and spacecraft alike.

The following article describing the process is a bit technical, but well worth a read and a share …

…… During high-velocity ballistics experiments, additional evidence for rapid polymerization is provided by high-speed video, demonstrating the immediate viscosity increase when the thiol–ene–trialkylborane resins contact atmospheric oxygen … . While other approaches for materials self-repair have utilized similar liquid-to-solid transitions, our approach permits the development of materials capable of sealing a breach within seconds, far faster than previously described methods.

Numerous applications, spanning the biomedical, automotive, and aerospace fields, would greatly benefit from the development of polymeric materials that undergo spontaneous self-repair when damaged, extending product lifetime or preventing catastrophic failure. To date, mechanisms for the self-repair of materials have largely utilized liquid-to-solid transitions, where the action of damage to a material initiates the polymerization of an incorporated reactive liquid monomer formulation …

…… An alternative self-healing approach utilizes a solid thermoplastic polymer that, when punctured by a high-velocity projectile, partially melts to allow the passage of the projectile while retaining sufficient melt strength to permit elastic recovery; subsequent polymer chain interfusion seals the breach.

…… The puncture of a thin material, millimeters or centimeters thick, by a high-velocity projectile can be devastating under certain scenarios. For example, if the material functions as a pressurized container wall, such as in a fuel tank, an airplane hull, or the walls of a space exploration vehicle … any breach causes the interior contents, whether fuel or air, to be rapidly ejected. The consequences are especially severe for manned spacecraft as the rapid loss of atmosphere would immediately endanger those inside. Systems that rely upon the mixing of two reactive liquid components, capable of slowly filling and repairing a puncture site over several hours, have been developed … however, for situations involving the breach of pressurized container walls, much faster healing mechanisms are required. Here, we describe a new autonomous-healing method to achieve extremely fast reaction rates by utilizing an environmentally borne initiation stimulus that is able to rapidly contact with and diffuse into a reactive liquid monomer formulation and effect polymerization.

……  Having demonstrated that thiol–ene TBB formulations rapidly polymerize upon oxygen exposure, these formulations were incorporated into trilayered structures and subjected to ballistics testing to simulate micrometeoroid puncture of a spacecraft wall. The trilayered structures were constructed by sandwiching a 1 mm thick reactive liquid monomer formulation layer between two 1 mm thick solid support panels (see Figure 2). The front, solid support panel was composed of PBG, chosen to ensure the formation of an approximately 1 mm diameter entrance hole upon projectile puncture, whereas the rear panel was composed of EMAA, a softer material that fully reseals upon ballistics puncture; this configuration permitted ready observation of the middle layer polymerization upon oxygen contact at the front entrance hole (see Figure 2). The results of firing a projectile from a rifle at the trilayered panels were recorded with high-speed video (placed in front of and behind the sample), high-speed infrared (IR) thermal cameras to record surface temperature, or both.

The influence of varying TBB concentration (from 0 to 2 wt %), in a resin formulation … on panel response upon puncture by a rifle-fired bullet and subsequent contact with atmospheric oxygen were initially examined using high-speed videography … revealed a striking difference in the amount of material ejected from the entrance hole (Figure 2). For formulations omitting TBB, a plume of monomer sprayed from the entrance hole approximately 1 ms after penetration for 2.3 ± 0.8 ms. In contrast, for TBB-containing formulations, irrespective of the TBB concentration, bullet penetration yielded little to no liquid monomer ejection … 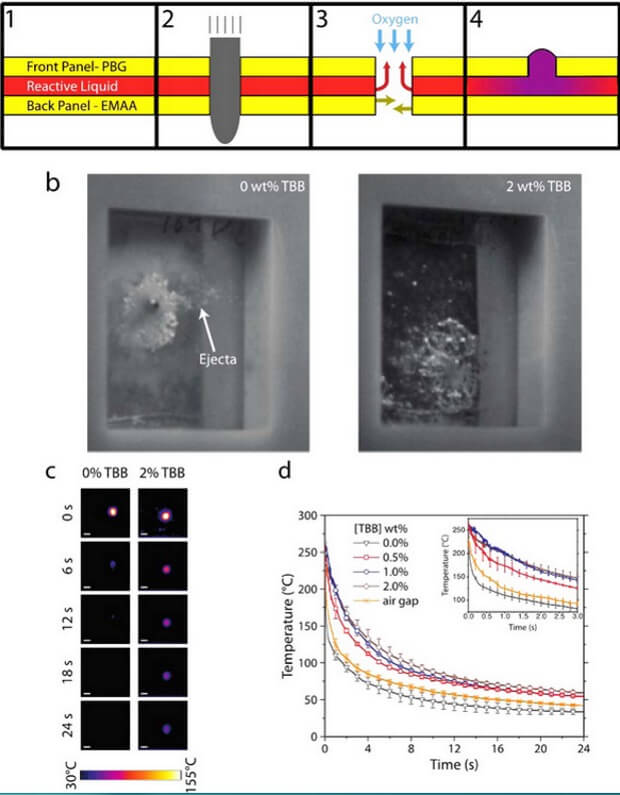 Figure 2. Ballistics testing of resin-filled panels. (a) (1) Trilayered panels, fabricated by sandwiching thiol–ene–borane resin formulations between solid polymer panels (PBG in front, EMAA at back, see text for panel and sample clamp dimensions), were (2) subjected to ballistics testing where penetration by 5.68 mm diameter bullets resulted in 1–2 mm diameter entrance holes with no exit holes; (3) as the reactive liquid layer flowed into the entrance hole, contact with atmospheric oxygen initiated polymerization, (4) converting the liquid into a solid. (b) Still images of panels and resin ejection during testing, taken from high-speed videography footage 2.5 ms after bullet impact. (c) Thermographic image series for EGDMP-TMPTAE resin-filled test panels containing 0 (left) and 2 wt % (right) TBB after bullet puncture at t = 0 s (scale =1 cm). (d) Maximum temperature at puncture site versus time for EGDMP-TMPTAE resin-filled test panels containing varying TBB concentrations and an unfilled test panel. Temperatures above 155 °C, outside the range of the thermal IR camera, were estimated by Gaussian fits to the temperature profiles within the camera temperature range.

The rapid reaction rates achievable by thiol–ene–alkylborane formulations, as evidenced by FTIR spectroscopy, high-speed videography, and thermography, demonstrate the potential for an environmentally borne reaction initiation stimulus to be utilized for self-healing applications. Although the model system described here was constructed from both structural (PBG) and nonstructural (EMAA and the resin itself) components, further application-oriented development of this concept would afford load-bearing walls capable of autonomous healing after multiple projectile penetration events, preserving the atmosphere inside pressurized vessels such as manned spacecraft.